Yes. In 2006 the Gay Marriage Act was passed in South Africa. This act gives gay and lesbian couples the exact same rights as straight couples. The only difference is that it is officially considered under a different legal act known as a “Civil Union”. TOP

2. What is the difference between a Civil Union Act and a Marriage Act

These acts vary from country to country. However, in South Africa, the key difference is the law under which it is governed. Historically and biblically, the definition of marriage has been between a man and a woman. In order to afford ‘marriage rights‘ to same-sex couples, many countries have provided for this under the ‘Civil Union Act’. The key difference is the definition of the partnership, however, the rights afforded and the recognition of these two acts remain the same. There has been some international outcry in the past, questioning whether this is still discriminating as it is under a different act. The general consensus however has been that the rights and recognition afforded are the same and hence the level of discrimination is negligible.

3. Is a marriage in South Africa internationally transferable?

Every country has its own laws regulating marriage and the international transferability thereof. This is especially true when same-sex marriages are not legal in other countries. Investigations for each country will need to be done on an individual basis.

4. Will the marriage be recognized in day-to-day living?

Although many people are ignorant or slightly taken aback to learn of a married gay or lesbian couple, your marriage certificate is legal proof that you have a husband or wife and the Republic of South Africa recognizes this.

5. What's the difference between gay and straight weddings?

You. The best part of getting married is that there is no standard to conform to, no rules to adhere to and most importantly no obligations to anyone. You have a blank canvas to custom make and construct every moment of your special day. This is the moment that you have to make your own in every way, it’s your elaborate scene in your individual style.

6. Do we have to have traditional elements in order for it to be considered marriage?

Walking down the aisle, bridesmaids, grooms men, first dances etc are all elements of a traditional wedding and you can incorporate them into your special day or you can ignore them completely. A wedding is not defined by these elements, it is a celebration of your union and it's your prerogative to choose how you want to experience it.

7. Can any marriage officer perform the marriage?

No. In order to legally perform a same-sex marriage, the marriage officer will also need to be qualified to perform civil unions (not all marriage officers are). There are however many people that can perform both and I will help you find the right person for your needs.

8. What about legal documents like ANC’s (Anti-nuptial Contract) etc?

Once again, this will vary from couple to couple and I have legal consultants to advise you on the various options available but these are just like heterosexual contracts and afford you the same rights as straight couples.

9. Which countries are same-sex marriages legal?

Although there are many places where some rights are given to same-sex couples, the degree of rights and recognition varies from country to country. In pursuit of equal rights for all gay and lesbian couples across the globe, these are frequently being updated, so please do your own research in this regard.

South Africa: November 2006 - South Africa became the fifth country, and the first in Africa, to legalise gay marriage. Couples married under this act are afforded all rights provided under the marriage act.

Belgium: January 2003 - Belgium became the second nation in the world to legalise same-sex marriage, the only condition being that at least one of the spouses must have lived in the country for a minimum of three months.

Croatia: March 2003 - Civil partnerships were granted provided that same-sex partner have shared a residence for at least three years. Civil unions in Croatia include some, but not all, of the rights and benefits of marriage.

Denmark: July 1989 - The world's first country to grant same-sex civil partnerships. These civil partnerships carry most, but not all, of the same rights and benefits of marriage. In 2009, new legislation was introduced to legalise same-sex adoption.

France: November 1999 - Civil Solidarity Pacts, which are contracts between couples, were introduced for both same-sex and heterosexual couples. These individuals are still considered single for some governmental purposes, but are afforded some rights and benefits of marriage.

Germany: September 2001 - German same-sex couples were allowed to register as life partners under the Life Partnership Act. This act does not carry the full benefits of marriage. In 2004, registered partners rights were expanded to include second parent adoption and simpler alimony and divorce rules.

Hungary: July 2009 - The parliament approved a partnership bill specifically for same-sex couples. This gives same-sex couples all of the rights of marriage with the exception of adoption and surname rights.

Iceland: November 1996 - Full marriage rights were granted to gay and lesbian couples under the registered Partnerships Act. In 2006, adoption rights were extended to same-sex couples.

Ireland: June 2009 - Ireland expanded rights for gay and lesbian couples by legalising same-sex civil partnerships. The new law in the heavily Catholic country grants some, but not all, of the rights of civil marriage.

Portugal: March 2001 - Civil unions were extended to same-sex couples without registration on condition of them living together for two years. In 2008, a same-sex marriage bill was introduced into Parliament, but failed by an overriding vote

United Kingdom: May 2005 - Domestic partners were allowed to register under the Civil Partnership Act. The legislation took effect, giving registered same-sex couples all of the rights of married heterosexual couples. The Civil Partnership Act applies across all of England, Wales, Scotland, and Northern Ireland.

Mexico: September 2006 - Mexico City legalised same-sex civil unions, this was however limited only to Mexico City. Neither same-sex marriage nor civil unions are recognised on a federal level. However, under general Mexican law each state must recognise the laws granted to individuals from other states, effectively legalising civil unions nationwide.

California: Although previously legal, in May 2009 The California Supreme Court reinforced the ban on same-sex marriage, but ordered that the marriages of the couples married prior to the gay marriage ban be recognised.

Connecticut: October 2008 – The Supreme Court in Connecticut overruled the ban of gay marriage to become the third state in the me to allow gay marriage.

Iowa: March 2009 - The Iowa Supreme Court made history on 3 April 2009 with a unanimous ruling, making Iowa the fourth state to allow same-sex marriages.

Maine: May 2009 - A bill legalising same-sex marriage in Maine was passed, making the state the fifth in the US to allow gay and lesbian couples to marry.

Massachusetts: July 2008 - Both same-sex couples that reside in Massachusetts and out-of-state couples can legally marry in the state of Massachusetts.

New Jersey: February 2007 - The law was passed that same-sex couples can get married under the Civil Union Act.

Oregon: September 2007 - Oregon passed a domestic partnership law providing gay and lesbian couples with all of the statewide rights and benefits of marriage, but not actual marriage.

Wisconsin: Although voters banned same-sex marriage in 2006 (and it is still not legalised), in August 2009 gay and lesbian couples could register for domestic partnership, granting them 43 rights associated with marriage including hospital visitation and estate planning. 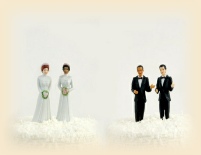